Having gone backstage to share a little pre-show love with the kids in our former group, I was shivering in the auditorium at the university waiting for the Big Island Taiko Festival to begin. Suddenly, I remembered why I had set myself a post-a-day challenge.

A week ago, I had a lovely chat with one of my besties back in Tokyo and he asked me what I’ve been up to here, what my typical day is like. I was flummoxed, not sure what ‘typical’ might even mean. Each day is different. Almost every day there is a new first, be it a new view, a new sound, a new taste or a new face. So far, at least, there’s been an almost mystical balance between being busy and stressed and allowing myself to relax into the beauty and serenity of this little corner of the world.

As the lights went down and the curtain went up, I was overwhelmed with a sense of happiness and gratitude, literally moved to tears by the awareness of how lucky I am and how sure I am that turning our lives upside down and moving here was the right thing to do.

The challenge was to look at a week and see what happens and decide whether or not it is typical. I have determined that the answer is yes. It was a typical week, in all of its odd bumps and bounty, it was typical. And I wouldn’t have it any other way.

We’ve just completed the seventh month of our residence here in paradise. I still don’t know what we’re doing. I had set myself a goal of six months to settle in, get my ducks (or nenes) in a row, figure out where we’re going from here. Instead, I find myself completely clueless. I admit to being overwhelmed, unable to process the array of new places and people and experiences flooding my life. To illustrate, in the past week, I….

…made some new friends…

…performed taiko drumming onstage at the University of Hawaii…

…sat in on an improvisational singalong…

…ran into some beautiful faces at Foodland…

…saw orchids bloom in my garden…

…had a mammogram in English…
…attended a drumming workshop…
…took part in a gratitude circle…
…had a girls’ night out in Pahoa…
…started a new exercise regimen…
…and played a hang drum.

The thing is, living in Tokyo, sometimes months went by and nothing interesting happened. Now something wonderful happens almost every day.

The key to this magic, I have discovered, is opening myself up to what could be instead of sitting on memories and waiting for magic to walk through the door. It almost never does.

I am overwhelmed, delighted, grateful and very, very aware of how lucky I am.

We were amazed by the number of cars our sleepy village had attracted. I had assumed we could park at the catholic church, but the lot was overflowing. We managed to slip Six into a small slot behind the high school.

We found a good spot to park ourselves toward the end of the parade route. In leisurely Pahoa time, the mayor passed by, then the VFW marching band. Close on their sweaty heels came the Puna Rebels football team in purple jerseys and flip-flops. There was one float, a flatbed decked out in palm fronds and exotic flowers, not the familiar tissue paper blossoms of my youth. (I know how to make those!) Next came the Puna Ukulele association, a group of somewhat grizzled men and women strumming and singing That’s Amore, what I thought was Me and Bobby McGee but turned out to be Bill Bailey, and Mustang Sally. Oddly, none of it felt odd which was odd in itself. Next were girl scouts dressed as boxes of cookies (Thin Mints! Tagalongs!) and looking sweet enough to eat. Then the Horse Owner’s Association, their mounts festooned with tinsel and jingle bells. Toward the end was a power shovel adorned with glittering Christmas finery, its shovel filled with brightly wrapped gifts. It slowly lumbered its way down Pahoa Village Road, seeming to grin as it enjoyed its reprieve from shoving volcanic rocks around.

But the spice in the curry is the people of Puna. They come in all sizes, shapes and colors, a variety of delights like the cheese and salami selection at a large Italian market. There are hippies, both wrinkled, gray-haired Woodstock survivors and neo wannabes, so young and bright, vegan crystal worshipers unaware that fringe and dreadlocks were once innovations. There are seniors, one-time owners of a Nebraska car wash, missing their kids now grown and flown, the lady in sparkly purple tennies muttering to her dog, the slim lady who JUST CAN’T STOP dancing the macarena. And there are kids, lots of kids, running and playing and chasing their butterfly dreams flitting among the hibiscus flowers.

I stood at the side of the road watching that rainbow of life pass by and felt it reach out and wrap my belly in a sticky web of memories and gratitude so thick I could barely breathe. I felt the charm of the village community event despite the challenges it had faced, the enormity of the changes in our lives since we left Japan almost four months ago, the fact that I was alive and well and breathing freely, supported by the strength of my own two legs. Safely hidden behind my floppy hat and sunglasses, I wept, and as I did, a little boy ran up to me and handed me a flower. At least I think it’s a flower. It could be a garage door opener for all I know, which makes it that much more charming. I laughed at my middle-aged self discovering life like a small child: a crack in the lava, the scent of an unknown flower, the pointed tongue of a neon green lizard watching me do yoga. It’s all new, all exciting, all needing to be investigated. I delighted in my own innocence.

The parade petered out, so we wandered toward the community center and watched our taiko drum group perform a few songs. They even did Hiryu, the same song our beginners’ class is going to perform at our recital on December 14. (If you’re going to be in the Kea’au area, do drop by Hongwanji around 6:00. We’ll really try to get some of the strokes right. And there’s a potluck after!)

By the time we’d absorbed the spectacle of the parade and its people and the pepper-pop throbbing of the drums, we were ravenous. We dragged ourselves to the Black Rock Cafe where I devoured a club sandwich and fries, still exotic foods in my Tokyo tainted mind. And then we came home, exhausted but replete, where all of us dropped into an afternoon nap as sweet as the pink pads on the bottoms of Monkey Boy’s feet. 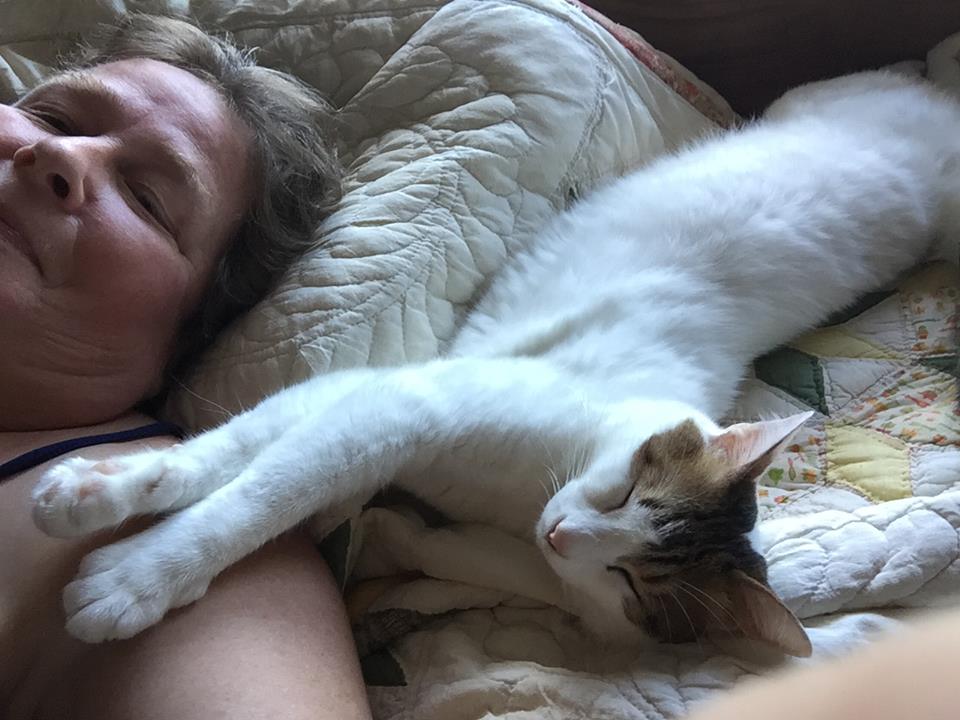 There are twenty-four more days of holiday cheer ahead of us. I’d best gird my loins.

Tuesday was a true day in paradise…almost. First thing in the morning, I went to yoga at the Hawaiian Sanctuary, where the name speaks for itself. In the late afternoon, we drove to Keaau where we signed up for taiko drumming lessons, something we’d both wanted to do for years. It doesn’t hurt at all that the lessons take place in a Buddhist temple.

Yes, I get the irony that we had to move to Hawaii to study Japanese drumming. It’s the same irony by which Lava Tree State Park is closed due to lava. Life’s little quirks are what make it worth living.

In between yoga bliss and drumming delights, though, was an endless phone call with health insurance people, or at least that’s what they called themselves.

I was nervous about this, having heard what a nightmare healthcare has become in the States, and knowing I was spoiled by my Japan’s socialized medicine system. But the rate they offered was just expensive enough to seem legitimate and yet not outrageous. As I sat there answering questions, giving away personal information, I had an inkling that I was being scammed but was unable to do anything about it, like slowing down to look at a wreck on the highway. Unfortunately, I was the wreck. Nobody wants to admit they’re being scammed; on some level we believe that makes us stupid. I got passed along from Kind Keri to Gentle Jimmy, feeling more and more stupid as time passed and when I finally started to object, they switched me to Chris the Dickhead.

Chris: I’m sorry this is so confusing for you.
Me: I’m not confused at all. You keep contradicting what Keri and Jimmy said.
Chris: Yes, I understand that you’re confused.
Me: Stop being so condescending. You’re the one who doesn’t have his story straight.
Chris: I’m not being condescending.
(“I’m not hungry,” said the Big Bad Wolf as he swallowed Little Red Riding Hood.)
Me: Fine. But you’re not making any sense, either.
Chris: Sweetie, if you would like me to explain it again, I’d be happy to.
Me: Did you just call me ‘sweetie’?

If it had been my grandmother who said that, or even YOUR grandmother, it might have been all right, but instead it was a nasty, knuckle-dragging, kindergarten drop-out who had decided that bullying was the way to get me to agree to this policy. I was incensed and therefore grateful when he switched me back to Gentle Jimmy. I suppose that’s all part of the strategy. These people know what they’re doing.

By the time I got back from drumming and read the documents and did some online research and gradually realized how completely I’d been taken in, it was too late to call them and argue. It didn’t matter, though. The damage had been done and I knew I would have to do some fancy footwork to get out of it. That meant getting up early to call my bank where I cancelled my debit card and then call the fake insurance people who cancelled the policy, or so they said. The phone rang and rang but nobody ever answered at the number they told me to call to confirm my refund.

Exhausted, I stared at the ceiling and tried to understand what had happened. Basically, they said I qualify for a good rate because I am healthy, unlikely to need drug or alcohol abuse treatment nor have babies, which means I wouldn’t be needing to use the insurance, which only covers preventive testing anyway. So that means they wanted me to pay more than $300 a month to NOT get hurt or sick. In other words, I would be paying for being healthy. In yet other words, I would be paying for something I already own.

Lesson one: If it sounds too good to be true, it probably is.

Lesson two: All future telemarketers who want to sell me insurance will be informed that I am Amish and therefore do not own a car and do not believe in insurance*; they’re probably too stupid to realize that I don’t have a phone, either.

*Kudos to the brilliant mind of Joyce Watkins Gardner for this one.